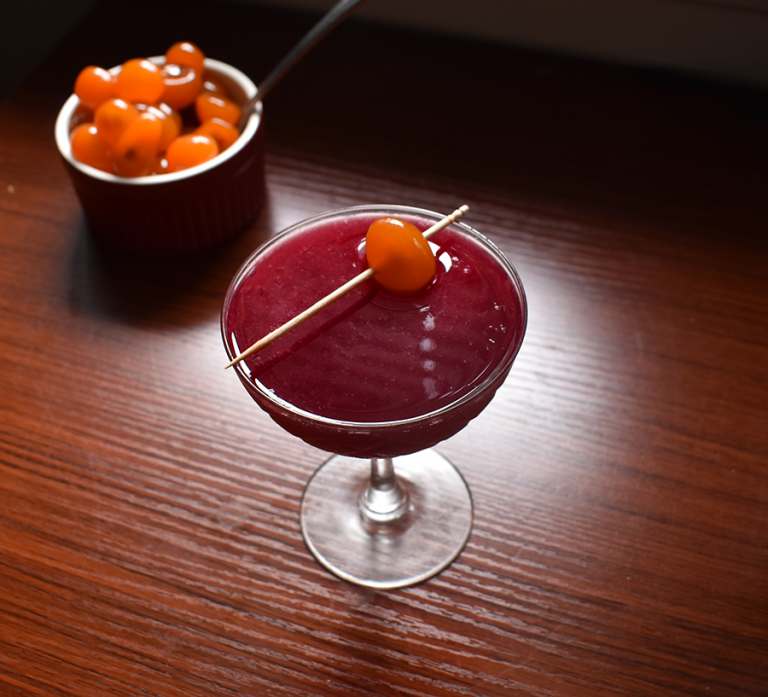 When I was a student in Pittsburgh I had the best cheesecake of my life. It was at a trendy little place on North Craig street called Legume, back when Negronis were just starting to become trendy and the farm to table label was an anomaly. The said cheesecake was a play on the classic combo of goat cheese, beets, and citrus, but in the form of a dessert: goat cheese whipped with cream cheese formed the cake, bolstered by a gingersnap crust, and served with bittersweet candied kumquats and earthy candied beets. Days after eating it, I just couldn’t stop thinking about that cheesecake.  I tried to recreate it numerous time with limited success, and while I’m hoping to try again, in the meantime, here’s a beet and kumquat cocktail to sip while you’re waiting. It’s got earthy beet juice, bittersweet kumquat syrup, port, bourbon, lemon juice, and a dash of bitters to bring out the flavor of the beets. An amber candied kumquat garnish finishes off the elegant drink.

Note: To make the beet juice, peel 1 medium-sized beet and shred it in a food processor or a large-hole grater. (If you have gloves, I recommend using them because the beet juice will stain your hands!). Combine shredded beet with 1 cup water and 2 Tbsp sugar  in a sauce pan and bring to a simmer. Cook until sugar has dissolved, then let cool. After cool enough to handle, blend in a blender and strain the juice using a fine mesh sieve. Store in a jar in the fridge.